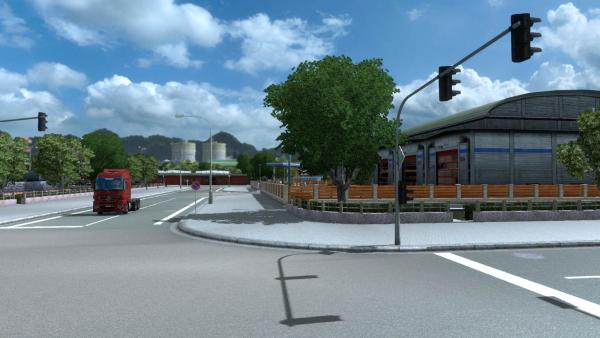 A graphic mod that globally changes the standard graphics and texture files of the ETS 2 simulator. The brightness, contrast and color gamut settings underwent dramatic changes, as well as textures were replaced with similar ones in high resolution.

The graphic mod with the original name MG Media for Euro Truck Simulator 2 is designed to significantly increase the effect of the realism of the virtual world not only on standard game locations, but also on author maps (in this case, the mod files must be given the highest priority). After installing the modification, players will see improved roads, barriers, sidewalks, road signs and signs, buildings, plants and much more, more natural raindrops on the truck windows will add realism to the weather, and the authors also corrected the lighting.

Well, you should know that the addition, due to the large volume, can create an additional load, thereby reducing the performance of the game.

Dear site user, whatever new mod you have installed in your game, do not forget to experience the quality of New trucks on the roads of the simulator ETS 2!
graphics realism
Previous modNext mod

Many gamers were not particularly pleased with the performance of tasks during inclement weather, so the bulk of the players sought to turn off the weather function in the ETS 2 settings. Now you can...

The graphic mod significantly changes the game image of the simulator, the authors did a great job of replacing and changing more than a thousand standard textures to high-quality ones, some models...