обновите на 1.40...
WE IN VK
SUBSCRIBE
Mods for ETS 2 simulator / Other mods / Cargo Pack for BDF 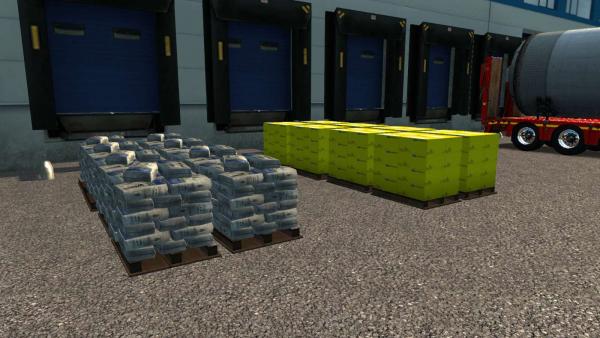 For any player of the ETS 2 simulator, a lover of vans, there was a problem of transporting goods, and thereby earning game money to continue a successful trucker career, because the opportunity was not thought out in the game. And now, having bought a BDF truck, thanks to the author's add-on Cargo Pack for BDF, upon arrival at the transport company, the driver will find new tasks that were not previously available. At the loading sites they will be waiting for boxes of goods, barrels or bags, upon approaching which they will be loaded into the body after pressing a button: T.

The BDF cargo mod for Euro Truck Simulator 2 is universal, and works both on ordinary locations and in additional maps, such as the Southern region and the like. The authors realized the possibility of new tasks in almost all logistics companies, the cargo models themselves were made in good quality using high-quality textures. Modification significantly diversifies the game world, making it more realistic, diverse and interesting.

Dear site user, whatever new mod you have installed in your game, do not forget to experience the quality of New trucks on the roads of the simulator ETS 2!
cargo BDF
Previous modNext mod

Big pack of tires and wheels

The unique look of the truck, one of the main tasks of the player of the ETS 2 simulator, which can be given by a large number of add-ons from many authors. A trucker can add original skirts,...

Extensive functionality that allows the player to install a new updated BDF frame on his truck. After modification, the virtual trucker will be able to transport goods on new types of trailers in...