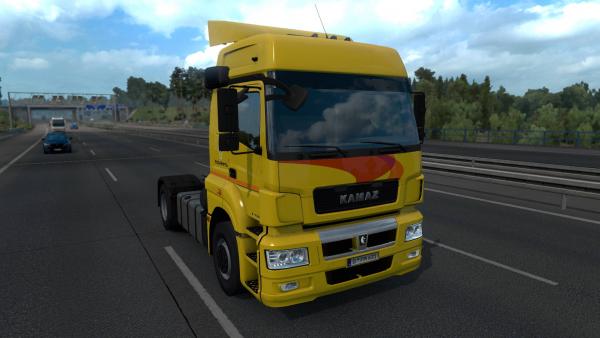 The KamAZ-5490 NEO / 65206 family of modern high-tech trucks are designed on a two-axle chassis with a 4x2 and 6x4 wheel arrangement, respectively. Trucks are characterized by high reliability and increased cross-country ability.

The KamAZ-5490 NEO / 65206 truck mod for Euro Truck Simulator 2 was created using a highly detailed three-dimensional model. Particularly noteworthy is the authentically recreated interior with full animation, an on-board computer and SiSL's Mega Pack support. The authors implemented four chassis with 4x2 and 6x4 wheel formulas, two types of cabs, high and low, a pair of 401 and 428 horsepower engines with their own sounds and realistic physics, as well as four 12-speed gearboxes. Players of the ETS 2 simulator will be pleasantly surprised by the presence of several original skins and accessories for external tuning.

The German truck Mercedes-Benz Axor 1840 MP3 begins to conquer the virtual roads of Euro Truck Simulator 2. The mod is made in high quality, the authors have implemented a single cabin with three...