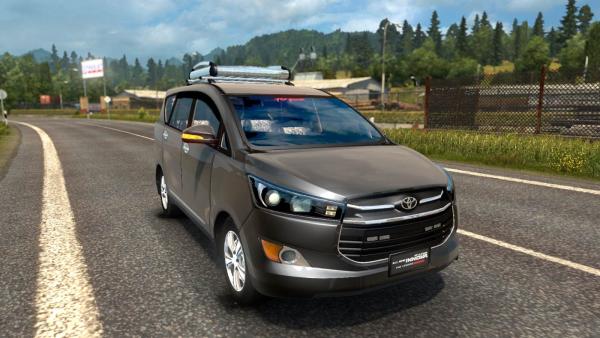 The Toyota Innova car was developed by the designers of Toyota at the beginning of the new millennium, and its serial production was launched in 2003. The car is designed in a minivan type body, has a right-hand drive, which is very useful for ETS 2 simulator players when traveling on a Bangladesh map. Deliveries of the car were carried out to Asian countries, and later, in many Asian countries, their assembly began.

The Toyota Innova AN140 passenger car mod for Euro Truck Simulator 2 recreates the second generation of the model in the game. The authors implemented an original right-hand drive interior with competently prescribed animation. There are a couple of types of chassis to choose from: standard 4x2 and all-wheel drive 4x4. In technical terms, the car can be equipped with one of three engines with a capacity of 136 to 175 horsepower and a pair of six speed gearboxes. For fans of external tuning in store a small set of additional accessories.

Passenger car Toyota Corolla, 12th generation sedan type, 2020 model year, will win the hearts of Euro Truck Simulator 2 lovers. The mod is of high quality, which gives the virtual brother of the...