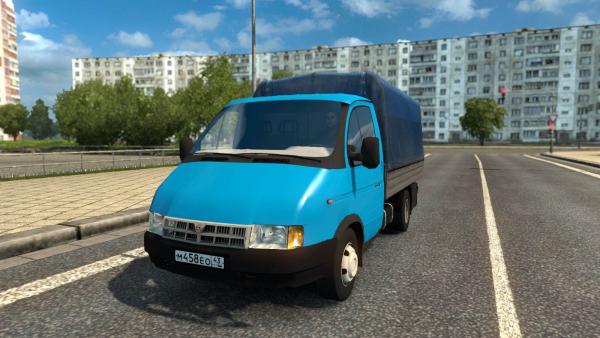 A large-scale by its standards mod, which combined almost the entire series of popular Russian Gazelle small-tonnage cars manufactured by the Gorky Automobile Plant. Unlike the virtual GAZ-3302, the new addition includes several generations and modifications of cars.

The Gazelle car mod for Euro Truck Simulator 2 implements three generations of trucks and vans in the game, starting in 1994 and ending in 2010. There are three types of cabins corresponding to their year of manufacture, including elongated ones, and a van-type body, five types of chassis, seven engines, both domestic and imported, with power from 100 to 145 horsepower, and five gearboxes. Players of the ETS 2 simulator will be pleasantly amazed by the rich arsenal of spare parts for external tuning, a set of their own sounds, the original interior of the cabin with animation, DLC support and the choice of the dashboard from three possible options.

Dear user of the site, traveling on the roads on the domestic truck, to feel like a real Russian trucker, we recommend you to download and install the mod Russian radio stations for any version of ETS 2 simulator!
GAZ van truck Gazelle
Previous modNext mod

The small trucks GAZ-3310 - Valdai and GAZ-3302 - GAZelle, manufactured by the Gorky Automobile Plant, significantly diversify the virtual world of roads. Several options for the chassis have been...

The originality of your truck is what most simulator players strive for. With the new mod, this will become much simpler and more interesting, as in the workshop we will have a large number of new...

The Gazelle-Business car GAZ-3302 from the Gorky Automobile Plant is presented in decent quality, a high-poly model, coupled with high-resolution textures, give the mod maximum realism. On the...