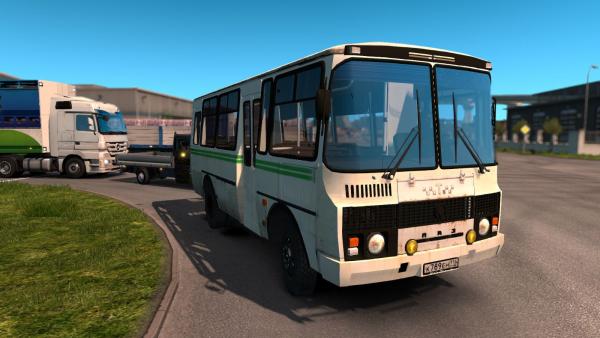 The Russian PAZ-3205 bus will appeal to virtual drivers of the ETS 2 simulator, fans of buses such as Ikarus 250, and others we have known since childhood. The passenger transport mod itself is still under development, it does not have an original cab, instead, the KAMAZ truck interior is used.

However, the presented test version of the mod is quite functional and fans of Euro Truck Simulator 2 will bring a lot of pleasant game hours. A carefully crafted body and texture of a real existing bus will pleasantly surprise even the most demanding players.

Dear user of the site, for passenger transportation by bus, do not forget to download and install Passenger mod for all ETS 2 simulator versions!
PAZ bus
Previous modNext mod

The time has come for a new stage in the development of the game, because the legendary Ikarus 250 bus, known to many from early childhood, has appeared in our arsenal. With its help, it became...