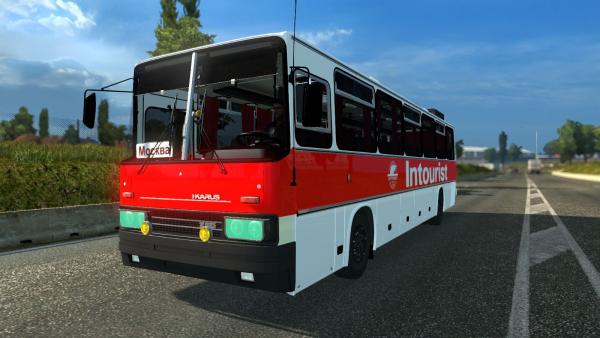 The legendary Ikarus 250 intercity bus, which is well remembered by the older generation, was produced in Hungary from the beginning of the 70s to the end of the 90s in Hungary, not only in the USSR, and subsequently in the CIS countries, but also in many other European countries , Africa and South America. For all the time, more than 130 thousand copies were made, which traveled along the roads linking cities and countries, with the help of a passenger mode, each player will be able to make the same trips spreading passengers.

The mod that adds the Ikarus 250 bus to Euro Truck Simulator 2 will appeal to domestic players, since almost every representative went on excursions to other cities in this wonderful transport. In our country, it was considered the most convenient and comfortable, and even now in some small cities you can meet this miracle of technology on highways.

The authors invested a lot of work in the modification of Ikarus for ETS 2, the transport has an elaborate interior, a working instrument panel, its own sound package and physics, corresponding to this particular category of passenger vehicles. Coloring skins are fully consistent with real-life prototypes. There are curtains above the windshield that can be raised or lowered using the corresponding buttons in the F4 menu.

Dear user of the site, for passenger transportation by bus, do not forget to download and install Passenger mod for all ETS 2 simulator versions!
Ikarus bus
Previous modNext mod

Rare lorries tightly entered the life of every virtual driver, because this is an opportunity to plunge into the not very distant past, when copies of such cars plowed the vast expanses of many...

The legendary massive German passenger car Volkswagen Kafer, listed in the Guinness Book of Records, and produced for several decades, is now in our game. Thanks to the developers of the mod, any...

The test version of the Russian bus PAZ-3205 ETS 2. At the moment, there is no own original cabin, so when playing in the first-person mode, the player will be in the cabin of the KAMAZ truck....