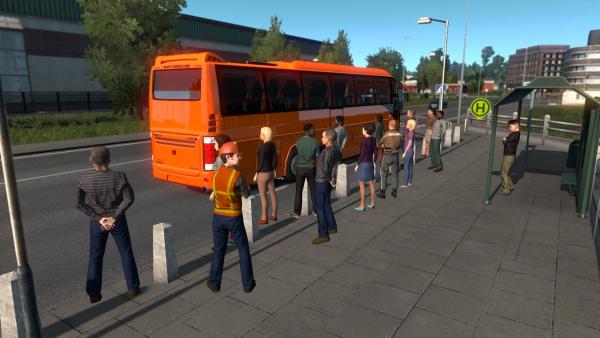 After the release of the passenger mode, among fans of the ETS 2 simulator, the possibility of transporting people began to be very popular. The new resource greatly expands the alternative to the standard gameplay, making it much more interesting and exciting.

The Bus Terminal passenger transport mod for Euro Truck Simulator 2 showed good performance. To activate it, the player needs to buy a special license for the implementation of passenger transportation activities, it looks like an invisible trailer - passenger, which you need to attach to your bus, then follow the specific signs on the map: Bus Stop, which means stop, or: Bus Terminal - bus station. All car passengers waiting for transport are registered autonomously, and have their own animation, which gives variety and realism.

The add-on operates throughout the standard map, including the latest DLC, and is also compatible with almost all buses created by the authors of the modifications.

Dear site user, whatever new mod you have installed in your game, do not forget to experience the quality of New trucks on the roads of the simulator ETS 2!
bus passenger transportation realism
Previous modNext mod

The Venezuelan passenger bus Encava 3300 is limited in gaming capabilities, but is useful for lovers of passenger traffic, as it has a pretty colorful look, thanks to the bright original skin, and...

The new addition adds a new oversized load to transport companies, namely a semi-trailer with a huge trunk of an exotic baobab tree. The player will have to make his own route, different from the...

We offer virtual truckers to retrain as drivers of fixed-route passenger transport. With a new universal addition to the simulator, a EAA Brazil map, eight brand new bright and colorful buses and the...

If you are the owner of the bus and aimlessly travel along the long roads of the simulator, then you just need to install a new modification that allows passengers to be transported. After adding the...