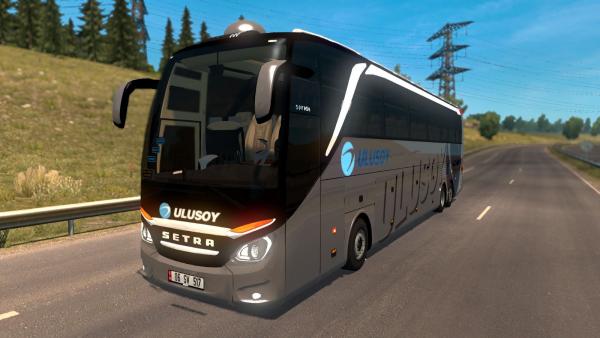 The top-of-the-range Setra S 517 HDH bus, produced in Germany, designed to carry 59 passengers, was developed by engineers at the Daimler AG auto concern. The Setra passenger vehicle, unlike the Setra S431 DT, is built in a one-story body layout and is perfect for operation on city and suburban routes, and ease of operation, despite an impressive length of 14 meters, allows you to effortlessly overcome dense city traffic.

The Setra S 517 HDH bus mod for Euro Truck Simulator 2 has in its assortment a rich set of engines, a small tuning kit, an original interior of the passenger compartment and the driver's cab with a functioning instrument panel. Well, this masterpiece of the additions of the ETS 2 simulator completes, the ability to paint the body according to the scheme in metallic colors and the set of own sounds prescribed for each engine.

Dear user of the site, for passenger transportation by bus, do not forget to download and install Passenger mod for all ETS 2 simulator versions!
Setra bus
Previous modNext mod

The EvoBus Setra S431 DT bus in excellent quality, with an assortment of wheels, engines and gearboxes, is perfect for transporting passengers in comfort over long distances. A well-designed...

Volvo B9R bus made in excellent quality using a high-quality model. The car dealership offers a choice of low or high landing, which in turn is presented in two versions. For original customization...