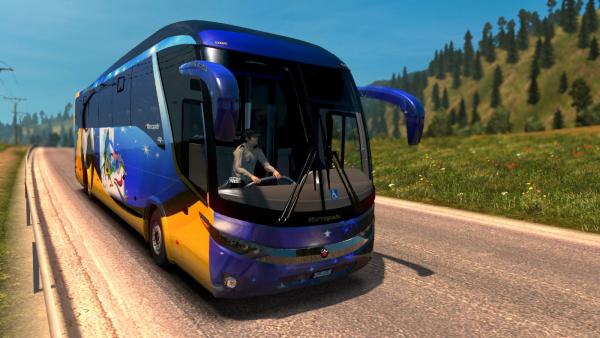 Another colorful representative of the Brazilian bus concern Marcopolo, engaged in the production of city, suburban and intercity passenger vehicles, the Paradiso G7 1200. The luxury bus began production in 2009 and has occupied a worthy competitive niche among similar vehicles in South America.

The mod of the regular bus Marcopolo Paradiso G7 1200 for Euro Truck Simulator 2 is designed to qualitatively expand the functionality of the simulator, in addition to tasks for transporting goods, to carry out passenger transportation. When buying a bus in ETS 2, a virtual trucker can get a package of twelve stylized skins for graphic painting of the body, several gearboxes and engines. The driver can place passengers in the passenger compartment, who will be accompanied by a conductor, standing next to the driver and admiring the beauties outside the window. Of particular note is a detailed interior and driver compartment with a dashboard.