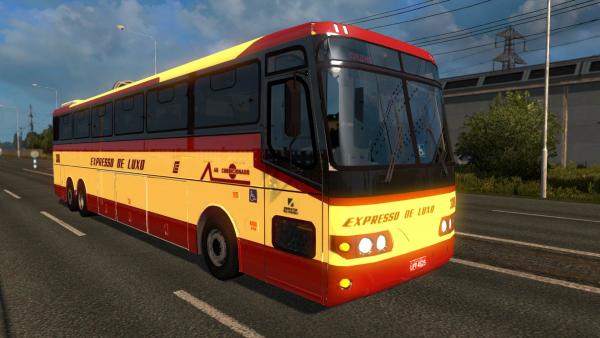 Coach Scania CMA Estrelao, specially designed by Scania engineers for Latin American countries, has a high degree of security and a super comfortable cabin for 54 passengers.

Scania CMA Estrelao tourist bus mod for Euro Truck Simulator 2 is based on the original three-dimensional model of the body and interior. In the vehicle compartment, the authors carefully implemented animation of instruments, buttons, switches and steering wheel adjustments. Just like MAN Lion's Coach, the new passenger vehicle has a wide range of choices for a variety of engines with power from 360 to 420 horsepower, several seven-speed gearboxes, its own set of soundtracks and 19 bright and colorful skins. And for tuning, the player of the ETS 2 simulator, developers of the modification added LED information plates, several types of curtains and tinted windows, placing people on seats, and many other pleasant things.

The three-axle version of the MAN Lion's Coach (MAN Fortuna) tourist bus is built on a chassis with a 6x2 wheel arrangement. The developers implemented four engines with a capacity of 320, 360, 400...