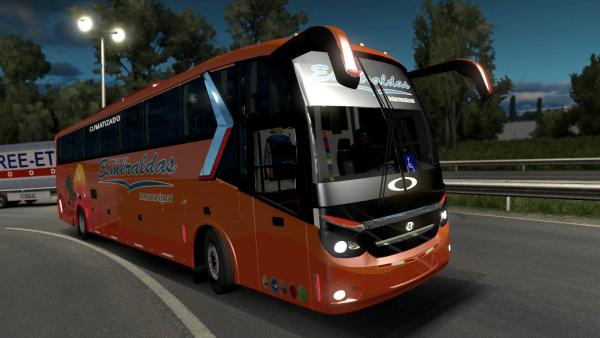 The Cepeda C6 shuttle bus, designed to carry 40 passengers, was designed on the basis of the Scania K 360. The vehicle has a 4x2 chassis and was produced by the Ecuadorian company Cepeda.

The Cepeda C6 bus mod for Euro Truck Simulator 2 is notable for its good workmanship; when it was created, the authors used a highly detailed three-dimensional model of the exterior and interior, where the animation of the buttons, switches, gauges and steering wheel adjustment is fully implemented. When buying a vehicle at the Scania dealership, the player of the ETS 2 simulator will be asked to choose one of five engines with power from 360 to 440 horsepower with its own set of soundtrack, and a gearbox at 6 or 12 speeds. In addition, the developers added 24 bright original skins.

Dear user of the site, for passenger transportation by bus, do not forget to download and install Passenger mod for all ETS 2 simulator versions!
Cepeda Scania bus
Previous modNext mod

Coach Scania CMA Estrelao, designed for Latin America, begins to conquer the vast road network of the game Euro Truck Simulator 2. The virtual version of the passenger vehicle has the option of...