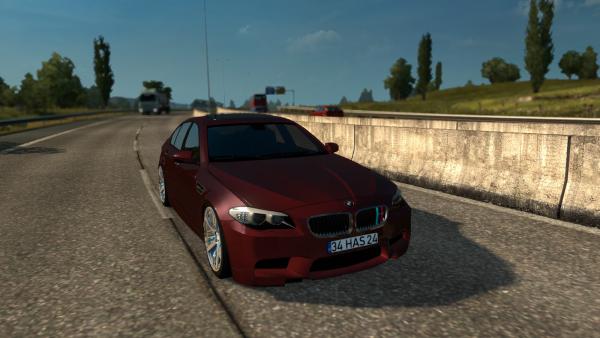 The sixth generation of the elite foreign car BMW M5 F10 was presented to the court of motorists a few years ago, in the summer of 2011. The new fifth series of the famous BMW car received modern and advanced technical content. The car was equipped with a seven-speed gearbox and a powerful engine of 560 horsepower, and may well compete in speed with the BMW M4 F82 sports car, also produced by the Bavarian Automobile Plant.

The BMW M5 F10 passenger car mod for Euro Truck Simulator 2 is built on the basis of a high-quality model, the authors used high-resolution textures. For a virtual trucker of the ETS 2 simulator, when buying in the salon and in car repair shops, four interior options are available with different color shades, as well as a tuning set, among the add-ons with a tow bar and flashing beacons. For fastidious drivers there are original wheels with tires. And of course, the developers registered their own physics of behavior and added a characteristic palette of sound.

Luxury sports car Pagani Huayra by Italian manufacturers in the body such as a two-door coupe carbon fiber, the developer mode for the foundation was taken qualitative model, which has its own...

High-performance powerful passenger car BMW M5 E60 from Bavaria with a well-executed body model and a well-designed interior. It has its own instrument animation, original wheels with branded tires,...

Bavarian sports car BMW i8 BMW i8 unfortunately does not have additional elements for tuning, but this flaw is easily covered by the original interior of an elite passenger compartment, its own...