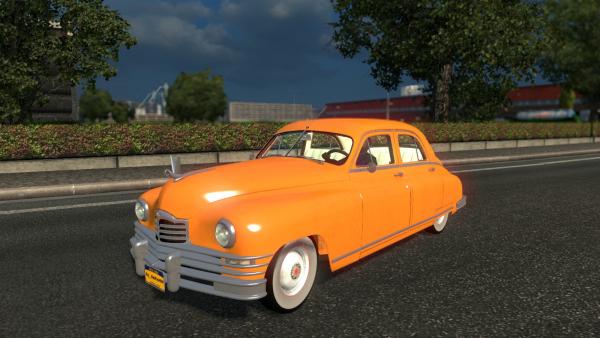 A 1948 Packard Eight car was developed by engineers at the Packard automobile company in the second half of the forties of the last century. The auto giant specialized in the production of luxury cars, as evidenced by the solid trim, large interior space and softness. The body has characteristic smooth lines and a large number of chrome parts, which was a trend for that time.

The mod of the 1948 Packard Eight passenger car for Euro Truck Simulator 2 will be a good addition to the simulator for lovers of retro cars, the collection of which already has a Mercedes-Benz LS-1519. The authors recreated the classic style of appearance that exactly conveys the spirit of the time, which is very unusual for modern ETS 2. Roads are almost completely identical to the original, the dashboard and levers have their own animation, and the steering wheel is so well made that there is an acute desire to touch it , of the additional options available only a GPS navigator installed under the windshield. Virtual truckers will be pleasantly surprised by their own set of wheels, the original soundtrack and the corresponding physics of behavior.

Dear site user, for cargo transportation by passenger car, do not forget to download and install the mod Passenger trailer for all ETS 2 simulator versions!
cars Packard
Previous modNext mod