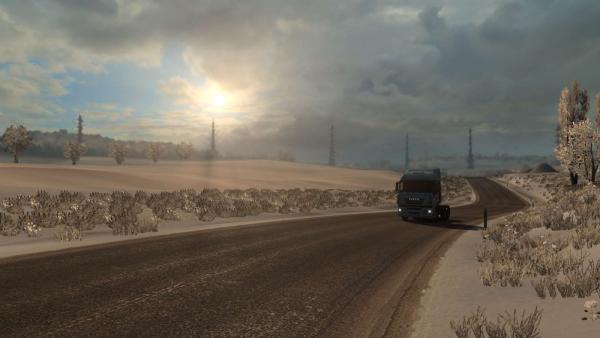 Although winter is drawing to a close, warm clear days are all around us that we all miss, and the restless soul of a virtual trucker still requires extreme trips along the endless snow-covered tracks of the ETS 2 simulator. To do this, the player has many mods that turn a constant virtual summer in the cold season. Not so long ago, we already tested the strength of our trucks with the addition of Frosty Winter, and finally, the next addition was updated to the current version.

Complete Winter Mod - Complete Winter Mod for Euro Truck Simulator 2 turns the standard game time of the year into endless winter with snowfalls, blizzards and frosts. The authors processed all the textures, registered the effect of the ejection of snow mass from under the wheels of cars, adjusted the duration of daylight hours, changed the physics of the behavior of vehicles on an icy road. Snow removal equipment appeared on suburban highways and city streets. The mod is universal, and works with many added territories, especially relevant at Russian locations, including the Map of Siberia, where it will look very vital.

The developer took into account the different preferences of the drivers, so each change can be connected or disconnected individually. You can find several files in the archive, the main one being the base [BASE], which contains everything you need for the cold season, depending on the version you will find [UPD], which contains bug fixes from previous releases. In the additional part there are the following files: [ADDON] - contains wheel protectors, special equipment for snow removal and other attributes; [ADDON] Extreme - will complement the simulator with new winter physics; [ADDON-MAP] X-MAS atmo - a set of Christmas applications (you must use it with caution on third-party maps!).

Dear user of the site, choosing your favorite time of year, we recommend you to download and install a suitable map for your version of the simulator ETS 2!
winter
Previous modNext mod

Seasonal mod that changes the standard summer time of the year to a frosty winter season. The author of the project managed to completely replace almost all the textures of roads, curbs, sidewalks,...

Tired of a constant summer in the game world of the simulator? Then the early autumn mod is especially for you, because the addition in full changes the default eternal summer time to the landscapes...

The tropical mod for Euro Truck Simulator 2 dramatically transforms the game world of the template climate into a new and unusual one. The familiar environment turns into the tropics. Instead of the...