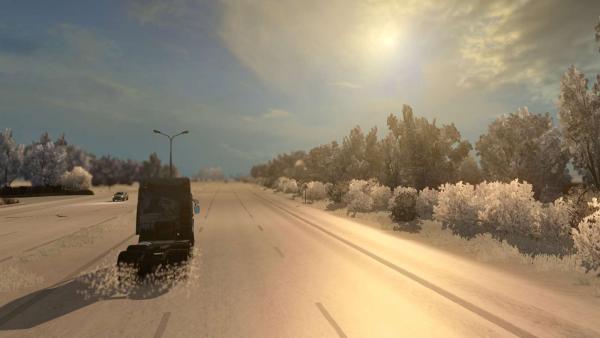 One of the largest seasonal mods of the ETS 2 simulator dramatically changes the template summer graphics for the winter season. The add-on is universal, as it works not only on a standard European location, but also on almost all additional maps and official DLCs. The winter mod for Euro Truck Simulator 2 from the author of Black Dragon fully implements the cold season by replacing the textures of the surrounding world, the implementation of new weather conditions and rainfall in the form of snow. In addition, the developer prescribed the characteristic physics of transport behavior.

A clear sunny weather with a temperature difference of 15 to 30 frost, snowfall and fog can expect a virtual trucker on the way. It was not forgotten about the change in daylight hours, the ejection of snow mass from under the wheels of cars, slippage on slippery roads, as well as new textures for winter tires were added.

Dear user of the site, choosing your favorite time of year, we recommend you to download and install a suitable map for your version of the simulator ETS 2!
winter
Previous modNext mod

Spring is already on the doorstep, frosty and snowy days will soon be remembered, the sun and birdsong are waiting ahead, and the restless soul of a trucker still requires extreme driving on an icy...

The graphic mod significantly changes the game image of the simulator, the authors did a great job of replacing and changing more than a thousand standard textures to high-quality ones, some models...

The American trucker simulator is very similar to our favorite ETS 2 game, the difference is the individuality of the geographical location of the North American country, a kind of traffic,...