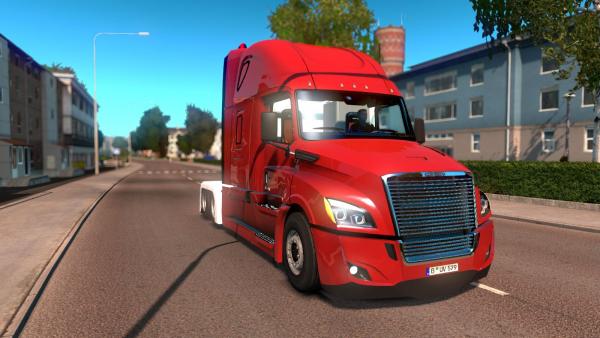 A powerful tractor with an engine located under the hood, an American-made Freightliner Cascadia, is still at the development and testing stage, which is scheduled to be launched in 2018. Engineers tried to embody in the truck all the most advanced modern technologies and standards of auto production, including improved performance, safety, environmental friendliness and fuel economy, which suggests the high competitiveness of the future truck.

Although the truck will appear on the roads only next year, the virtual truckers of the ETS 2 simulator are already given the opportunity to test the truck right now. First of all, the addition will be interesting to fans of heavy Americans, such as Peterbilt 579.

The mod of the Freightliner Cascadia 2018 truck for Euro Truck Simulator 2 is made in very high quality, the authors put a lot of time and effort into the modification, as a result, when buying or upgrading, we have a choice of five cab options with an original interior, two packs of characteristic sounds, branded wheels , twelve types of engines of different power, five gearboxes, as well as a complete set of external tuning to create a unique appearance of the car.