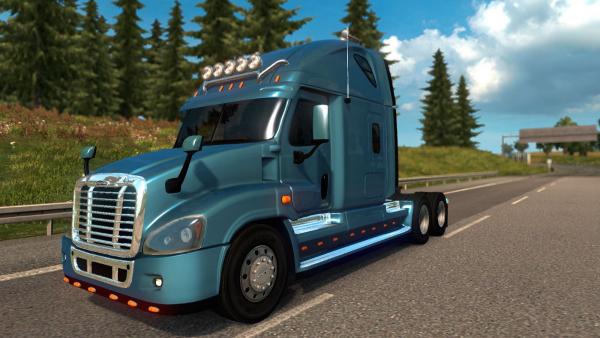 Representative of one of the ultra-modern highway tractors Freightliner Cascadia, manufactured in the United States, with a bonnet engine. When developing the truck, the developers implemented the latest engineering solutions, in connection with which the car received a lot of lightweight parts made of duralumin, the aerodynamic geometry of the cab and air suspension, which improved driving performance. After modernization of the engine, they received greater fuel economy and reduced emissions of harmful substances into the atmosphere. The driver’s cab, in turn, has become more comfortable for the driver, and in terms of spaciousness can compete with his American counterpart International 9400i.

The mod of the Freightliner Cascadia truck for Euro Truck Simulator 2 is developed, as they say, from scratch. The authors used real design drawings to create it, in connection with which they managed to recreate the truck in the virtual game world exactly to the smallest detail. Although the car has only one version of the cab and chassis with a 6x4 wheel arrangement, the range of engines is represented quite widely, but the developers did not stop there and prescribed their own original sound set for each engine. It is worth noting a significant set of tuning to personalize the appearance of the car, an incredibly large number of them have been prepared for the ETS 2 simulator, among which are spoilers, visors and other elements, as well as a trucker, if desired, can also tint the headlights in addition to glass. But I especially want to note the interior of the cabin, full-fledged visualization and the driver’s workplace worked out to the smallest detail and a comfortable partner's place where you can go, coupled with the support of DLC Cabin Accessories, make the modification one of the best in this segment.

In addition, you can download the pack of skins to give the truck more realism, do not forget to install it set the highest priority over the files of the main mod.

RETURN
Tested on ETS2 versions: 1.23 - 1.35
For sale in salons: Iveco or Scania (depending on the version of the game)
Author(s) mod: Jon_Ruda, Sergej Baltazar, Mandy, Kriechbaum, SISL, Solaris36, CyrusTheVirus

The American truck Freightliner Cascadia 2018 will appear on the roads only next year, however, we already have the opportunity to test this miracle of modern engineering. The car is made in very...