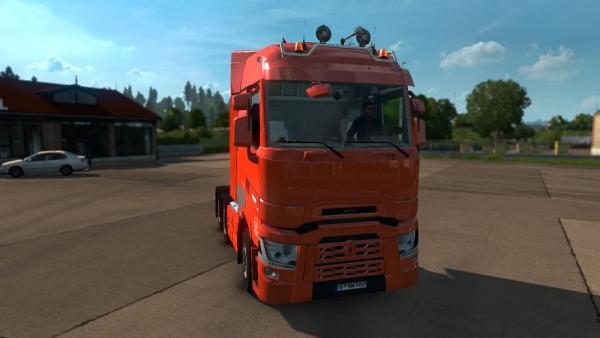 The main truck of the Renault Range T, the first copy of which left the Renault company gate in 2013. Modern cab design and advanced assembly technologies allow the truck to stay in the top of cars of this class. The range of tractors produced is quite wide, the machines are equipped with engines from 380 to 620 horsepower of Euro-6 standard, and the chassis has wheel formulas 4x2, 6x2 and 6x4.

Mod truck Renault Range T for Euro Truck Simulator 2 recreated on real-life prototypes, in high quality. The carefully designed original interior of the cabin, the chassis, presented in six versions, and the cabin in two variations became the reason for the add-on's high popularity and are almost on the same line in the ranking with MAN TGS. Truckers of the ETS simulator in the garage or when buying a car at a car dealership will be able to install standard tuning on it or choose a complete set to your liking, including three engines and two gearboxes. Among other things, there is its own physics of behavior and a characteristic number of sounds.

The British off-road passenger car Range Rover Supercharged 2008 is made in decent quality. The player is offered two types of suspensions, an original engine with gearbox, a number of sets of...

The luxury Range Rover Startech crossover has a genuinely recreated interior in two colors with prescribed animation of instruments and levers. The virtual driver can choose a set of wheels from the...