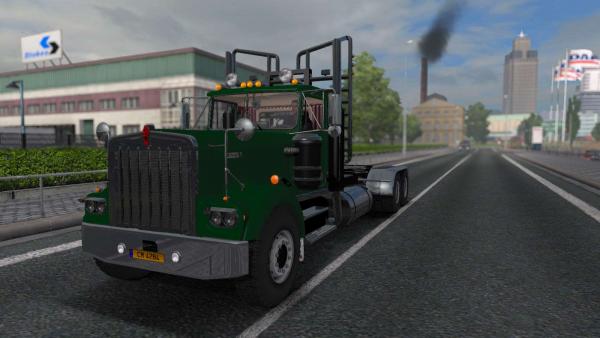 The powerful American truck Kenworth W900A has been produced since 1961, thanks to the time-tested design, it is still one of the most popular models among North American truckers. The truck has an engine compartment, which makes it easily recognizable on the whole planet as a representative of trucks manufactured in the USA.

The mod of the Kenworth W900A tractor for Euro Truck Simulator 2 is good from all sides, for its implementation the authors took a high-quality three-dimensional model of a car from the game: 18 Steel Wheels. The developers of the modification spelled out a large number of engines and gearboxes, which makes it possible to transport even heavy cargo. To improve the appearance, there is a wide range of spare parts for tuning, including bumpers, fenders, mirrors, spoilers, lighting and many other pleasant things. When buying at a car dealership, the virtual driver of the ETS 2 simulator will be offered a choice of two cabs with an original interior and functioning animation.

Dear user of the site, carrying out the transportation of goods on the virtual roads of Europe, for a variety of gameplay, do not forget to download and install new maps for any version of the simulator ETS 2!
Kenworth tractor truck
Previous modNext mod