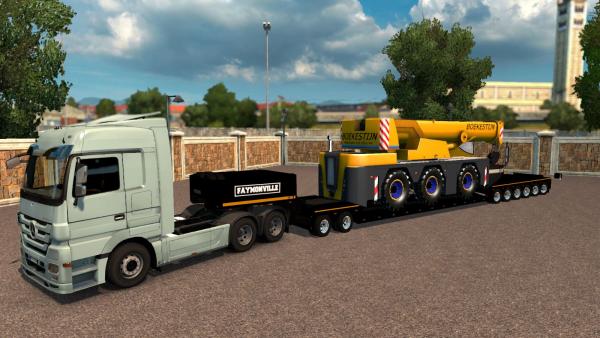 The mod of new low loader platforms and oversized cargo of large mass under the original name Big Heavy Pack opens a new era of add-ons for the ETS 2 simulator, as the modification supports the latest versions of Euro Truck Simulator 2, as it implements innovations such as lifting axles, steering wheels, a new coupling and other pleasant innovations of the latest versions of the game.

The pack of trailers and goods contains eight low loader semi-trailers and a large number of oversized cargo. Cargoes have different masses, weights vary from 9 to 78 tons, besides masses they vary in size, among them there may be yachts, trucks, heavy construction equipment, parts of huge mechanisms, and much more, there are 660 of them. A To transport such heavy loads you need a powerful tractor such as Hemmit. Platforms and semi-trailers are made by the authors in high quality, equipped with original wheels and have realistic coloring. Depending on the severity of the transported number of axles can be from three to ten. All trailers have real prototypes and are recreated according to the original models of Kogel Trailer, Goldhofer, Faymonville and Kassbohrer. The new mod significantly adds realism to Euro Truck Simulator 2, because a virtual trucker will have a much harder time driving a machine with a heavy and oversized load.