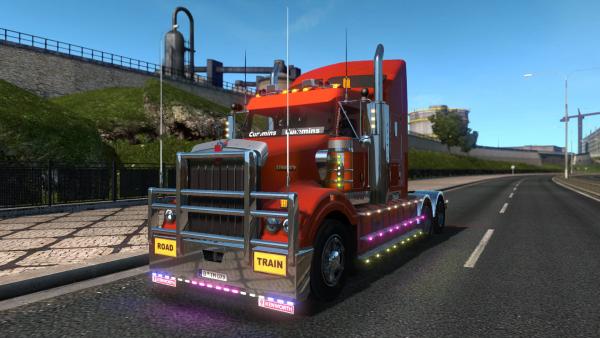 The American Kenworth t408 SAR truck tractor, unlike its Kenworth K108 type counterparts and the like, has a hood-mounted engine arrangement typical of most trucks produced in the United States.

Mod truck Kenworth T408 SAR for Euro Truck Simulator 2 is designed on the basis of the chassis with the wheel formula 6x4, there is a choice of 32 engines from well-known manufacturers with realistic characteristics, power from 370 to 720 horsepower, added six gearboxes at 10, 12 and 18 speeds, pick up that the player simulator ETS 2 can when buying a car, or its modernization. Special attention should be paid to the corporate interior with animation, all kinds of tuning, which includes antennas, visors, exhaust pipes, fuel tanks, additional lighting devices and other useful accessories. In addition, the addition includes seven original skins and a set of its own specific soundtrack.

A thoroughbred American, the Kenworth K200 tractor will now delight players with its splendor not only on US highways, but also on the endless roads of Europe. The developers of the modification...