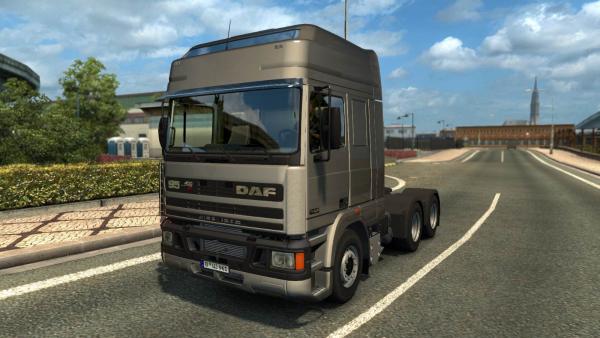 The DAF 95 truck was developed in 1987, and was technically one step taller than its predecessors. The designers of the company DAF equipped a car that looks similar to the DAF CF 85, a more powerful advanced turbocharged engine.

The DAF 95 truck mod for Euro Truck Simulator 2, based on a truck tractor, has seven chassis options with 4x2, 6x2 and 6x4 wheel formulas. The authors recreated four cabs, the same number of engines with a capacity of 329, 364, 401 and 428 horsepower and gearboxes at 12 and 16 speeds. The truck has an original interior in three variations with full animation and support for DLC Cabin Accessories. Players of the ETS 2 simulator will be pleasantly surprised by the possibility of external tuning and a set of their own sound design.

Dear user of the site, carrying out the transportation of goods on the virtual roads of Europe, for a variety of gameplay, do not forget to download and install new maps for any version of the simulator ETS 2!
DAF truck tractor unit
Previous modNext mod