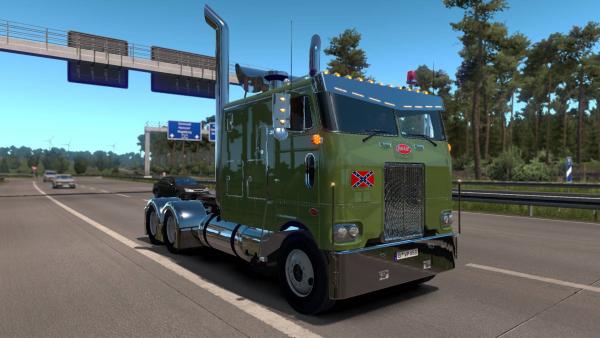 Many fans of American heavy trucks are accustomed to the fact that most of the trucks produced in the United States, the engine is structurally located under the hood, as, for example, the Peterbilt 359, but there are exceptions. One of these special trucks is the Peterbilt 352, which has a history of more than half a century.

Mod truck Peterbilt 352 for Euro Truck Simulator 2 on the basis of the tractor includes two variants of cabins, four types of chassis with a wheel formula 6x4, 8x6 and 10x6, including variations of Short and Long. Added 23 engine known producers capacity of from 370 until 1,000 horsepower, and more five tens of transmissions. The new truck has an original interior with animation and support for DLC Sisl's Mega Pack. In addition, the player simulator ETS 2 has the ability to tune the car with a small Arsenal of branded accessories.