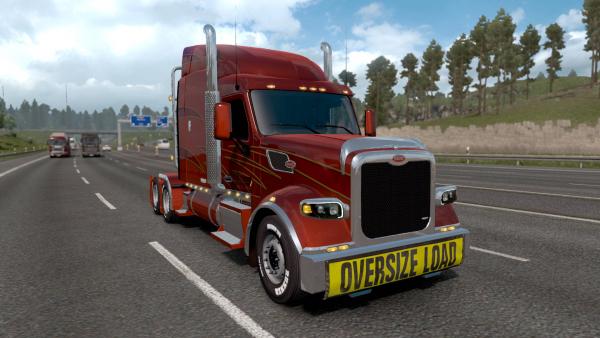 The Peterbilt 567 truck series was designed specifically for harsh environments. According to the manufacturers, the truck was intended for work in the fields of construction, mining and logging. The car has an impressive appearance, and the design of the cabin has a lot in common with the Peterbilt 377.

Mod truck Peterbilt 567 on the basis of the tractor for Euro Truck Simulator 2 is made in high quality. The authors have recreated a pair of cabin types and nine chassis variants with wheel formulas 4x2, 6x2, 6x4 and 8x4. On the technical side, 16 proprietary engines with a capacity from 370 to 605 horsepower and the same number of gearboxes for 6, 7, 10, 12, 13 and 18 gears are implemented, and a set of its own sound effects is added. For the virtual trucker simulator ETS 2 prepared high-quality interior cabin in three trim variations with full animation and the ability to install accessories.

For the exterior, the developers of the Supplement have prepared a rich assortment of spare parts for tuning, including fuel tanks, exhaust pipes, spoilers, wings, mudguards and other useful elements. Well, for the individual appearance of the exterior of the truck, there are 15 original color schemes coloring cabin.

A striking example of the classic American automobile industry, the Peterbilt 351 truck, in the game version is presented in all its glory of a real existing prototype. The player is given a choice...