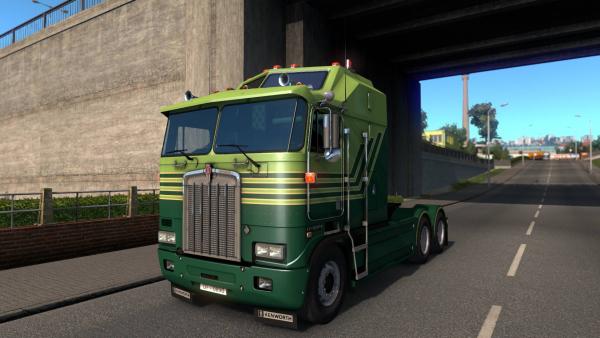 The legend of the North American automobile industry, the famous Kenworth K100 tractor, counts down its history from the beginning of 1960, when the first instance of this powerful truck left the gates of Kenworth Truck company. Production of trucks continued until 2004, after which, on the Assembly line it was replaced by a more modern car Kenworth K200. However, at the Australian branch of the company, the production of cars of this series lasted until 2011.

Mod tractor Kenworth K100 - E for Euro Truck Simulator 2 was created focusing on the requirements of the latest current version of the simulator ETS 2. The developers of the modification implemented four cabins, ten chassis with wheel formulas 4x2, 6x4 and 8x4, five powerful proprietary engines from 444 to 605 horsepower with a set of original sounds, and a dozen gearboxes at 5, 6, 10, 13 and 18 speeds. Special attention should be paid to the detailed interior of the cabin with prescribed animation, recreated in several colors, a rich Arsenal of accessories for external tuning and characteristic color schemes for the exterior coloring of the cabin.

A thoroughbred American, the Kenworth K200 tractor will now delight players with its splendor not only on US highways, but also on the endless roads of Europe. The developers of the modification...

The classic Kenworth K100 truck tractor has been known to everyone since childhood for the popular science fiction film Terminator 2. The model, executed with photographic accuracy, completely...