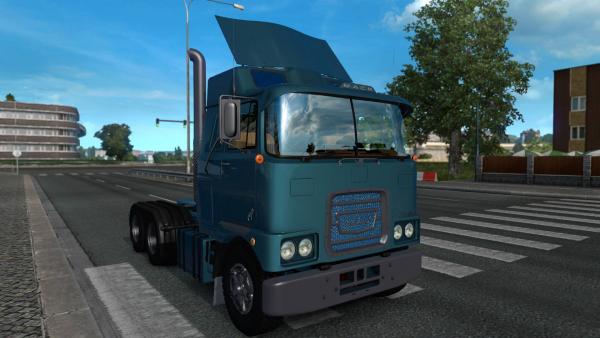 The American automobile giant Mack Truck, in 1962, began assembling new F-series vehicles. Their distinctive feature from their predecessors was the cabless cab layout, which is unusual for cars made on the North American continent. Production continued until 1981, when the Mack MH Ultra-Liner, developed in the same year, completely replaced them on the assembly line.

The mod of the Mack F truck for Euro Truck Simulator 2 based on the tractor has a fairly extensive alternative to the implementation of external tuning, in addition, in addition, several original skins are added. When buying an Mack truck, the ETS 2 simulator player has three cab options available, a pair of 4x2 and 6x2 chassis, six engines with power from 270 to 475 horsepower with their own set of realistic sounds and nine gearboxes for 15 and 18 gears . Particularly noteworthy is the well-designed interior in two color variations of the finish, with the realized possibility of installing accessories and characteristic animation.

The Mack Super-Liner truck developed by the Australian subsidiary of Mack Trucks has focused on the domestic market. The virtual version is as close as possible to its real prototype, the authors...