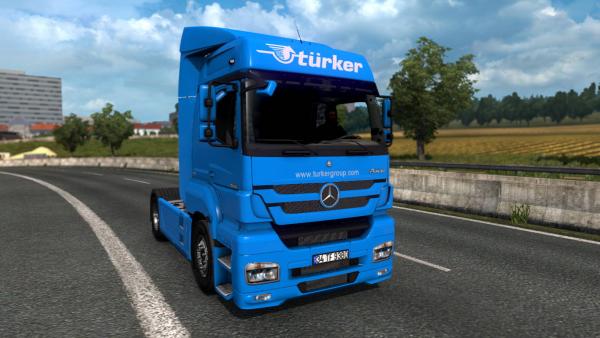 The Mercedes-Benz Axor family of trucks began to be produced by the German company Mercedes in 2001, and is still being produced. The gross vehicle weight ranges from 18 to 26 tons.

The mod of the truck on the chassis of the Mercedes-Benz Axor 1840 MP3 tractor for Euro Truck Simulator 2 is made in high quality, the detailed three-dimensional model of the cabin adds realism to the virtual truck on the roads of the ETS 2 simulator. The original interior interior with basic animation is equipped with a new on-board computer. On the technical side, a proprietary 401 horsepower engine with its own sounds, four gearboxes for 6 and 12 speeds are implemented. In addition, the authors have added 12 genuine skins of real companies.

Dear user of the site, carrying out the transportation of goods on the virtual roads of Europe, for a variety of gameplay, do not forget to download and install new maps for any version of the simulator ETS 2!
truck tractor Mercedes-Benz Mercedes
Previous modNext mod

The sports car Mercedes-Benz 300SL, from the German company Mercedes, in the ETS 2 simulator has a photographically accurate appearance and a classic interior, thanks to a high-quality...

Prestigious passenger car of the business class Mercedes-Benz C63 AMG in the back of the car in the ETS 2 simulator looks very realistic. When creating it, the authors used a detailed...

The German-made Mercedes-Benz Antos 1840 truck adds freshness and novelty to the standard ETS 2 game. Excellent quality bright model will quickly win the hearts of truckers. In addition to the...