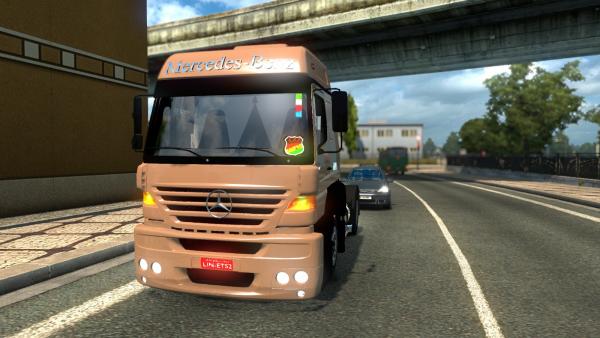 Since 2000, the German automobile concern Mercedes-Benz, the production of new trucks of the FSK series has been established. The vehicles were equipped with diesel engines with power from 270 to 500 horsepower, the Euro-1 environmental safety standard. Mercedes received an updated, more comfortable cabin. During the production, several restylings of the model were made, and in 2005 the production of cars was discontinued when they were replaced by the more advanced MB Axor series.

The mod of the Mercedes-Benz MB 1944 S tractor for Euro Truck Simulator 2 will appeal to fans of tuning, because the authors have implemented many options to give distinctive characteristics to their truck. In the kit you can find exhaust pipes, radiator grills with the logo of the manufacturer, fuel tanks, antennas and much more, the total number of accessories exceeds more than a hundred items. In addition, tinted glass is available for a virtual trucker, it is possible to place plates and stickers on a truck. Of the technical component, seven engines and gearboxes, six types of chassis with a 4x2 and 6x4 wheel arrangement are available. In addition, when buying at a car dealership, or when upgrading in any of the workshops of the ETS 2 simulator, the driver will be able to paint the cab in any color he likes; in addition, two drivers were prescribed by the developers to choose from.

Dear user of the site, carrying out the transportation of goods on the virtual roads of Europe, for a variety of gameplay, do not forget to download and install new maps for any version of the simulator ETS 2!
Mercedes-Benz truck tractor Mercedes
Previous modNext mod

The addition allows fans of the standard Mercedes-Benz Actros MP3 tractor to give an exclusive look, decorating it to your liking. Chrome parts appeared in the kit, which in the usual version were...

Easily recognizable truck Mercedes-Benz Antos 12 due to appearance and technical filling confidently stands above its competitors. The virtual version of the truck, presented in the simulator,...