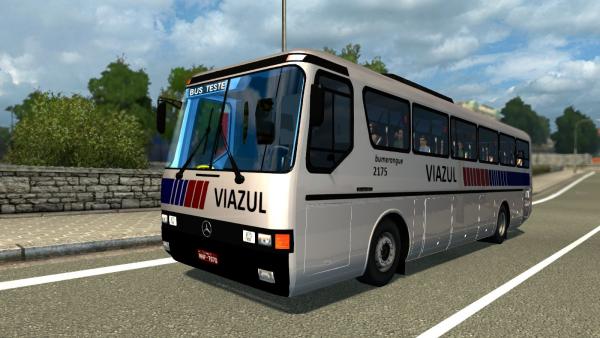 The Monobloco O-371 bus from the auto giant Mercedes-Benz was developed in the second half of the seventies of the last century for the Brazilian sales market. After some time, the assembly and release of this model was established in the South American country itself, where they are still working properly.

Virtual truckers of the ETS 2 simulator are given the opportunity to feel like a cool carrier, and drive along the endless mountain roads of Brazil on a rare workaholic Mercedes, delivering travelers from city to city with EAA passenger transport mod. A whole team of authors worked on the Mercedes-Benz Monobloco O-371 bus mod for Euro Truck Simulator 2. As a result, they completely, to the smallest detail, recreated a vehicle model with a 4x2 wheel formula, equipped with a 238 horsepower engine and a 6-speed gearbox. In addition, the developers of the modification prescribed the original physics of behavior, animation of the cockpit, and did not forget about tuning, although the number of elements is not so high, and they added a huge set of skin color skins.

Dear user of the site, for passenger transportation by bus, do not forget to download and install Passenger mod for all ETS 2 simulator versions!
bus Mercedes-Benz
Previous modNext mod

Coaches Mercedes-Benz Travego densely settled on the roads of Europe, on the expanses of many routes you can meet these representatives of passenger transport. Convenience and comfort, this is the...