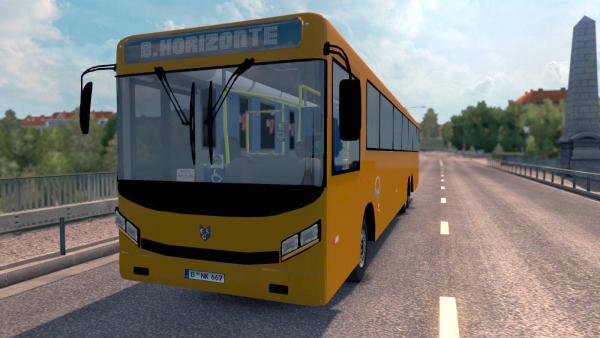 The MAN Triton 2016 bus has a collective image of an ordinary city passenger vehicle, was invented by the authors of the bus driver simulator OMSI 2, the German studio M-R Software. The developers of the mod embodied the idea of re-creating it in Euro Truck Simulator 2, thereby giving public transport a new life. The new MAN bus is made in accordance with all the rules for passenger traffic requirements, has a rectangular type of headlights, low-floor design of entrance groups for the convenience of people with disabilities.

When choosing a modification, the virtual driver of the ETS 2 simulator is provided with an assortment of two engines with a capacity of 228 and 280 horsepower, six four-speed gearboxes, original skin coloring skins, a small number of tuning elements. There is the possibility of seating people in the cabin, which will add realism after installing the mode of transporting passengers. The interior of the cab is well detailed where you can adjust the steering wheel. The player will like the original instrument panel with animation of arrows and additional objects located on it. In addition, the vehicle has its own sounds, physics of behavior and is registered in traffic, which makes it possible to meet it on the roads.

Dear user of the site, for passenger transportation by bus, do not forget to download and install Passenger mod for all ETS 2 simulator versions!
MAN bus
Previous modNext mod

The city passenger bus Caio Apache VIP I appeared on the virtual roads of the ETS 2 simulator, thanks to the hard work of the authors of the modification. The vehicle mod has a high-quality...

A comfortable Laksana Legacy Sky SR2 intercity bus manufactured in Indonesia, of a right-hand drive configuration, has its own sounds, two types of engines and twelve gearboxes, original skin...

Bus Scania Busscar Elegance 360 has proven itself as an alternative to conventional tractors, because with it, after installing a passenger mod, the game turns into a bus driver simulator. The new...

The Volvo 9700 Grand bus, presented in the simulator, is a series of models based on the Volvo TX platform. The set contains several engines, three and two-axle chassis, low and high landing frame...