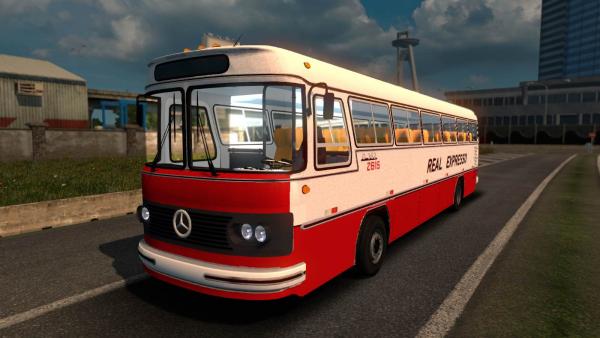 The passenger bus Mercedes-Benz Monobloco O-362 was developed by the designers of the German concern Mercedes in the early seventies of the last century. The vehicle was intended mainly for the market of developing countries, so their production was established at a subsidiary located in Brazil. The bus is simple and reliable, which significantly reduced the cost of its repair and maintenance.

The retro bus mod Mercedes-Benz Monobloco O-362 for Euro Truck Simulator 2 exactly repeats the outlines of its real brother. The smoothness of the lines of the body style of the sixties puts it on a par with vintage trucks like MB LS-1519 or LS-1525. To create the modification, the authors used a high-quality three-dimensional model with high-resolution textures. Unfortunately, the transport has no tuning at all, but the player of the ETS 2 simulator has the opportunity to choose the original skin from two possible.

Dear user of the site, for passenger transportation by bus, do not forget to download and install Passenger mod for all ETS 2 simulator versions!
bus Mercedes-Benz
Previous modNext mod

Coaches Mercedes-Benz Travego densely settled on the roads of Europe, on the expanses of many routes you can meet these representatives of passenger transport. Convenience and comfort, this is the...