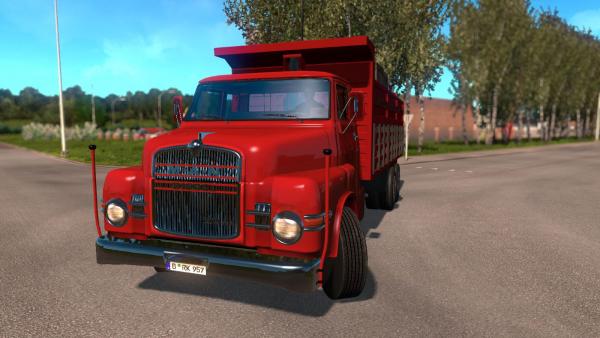 Retro truck from the last century MAN 520 HN, which saw the light in the sixties, is the brainchild of two large auto giants: the German MAN AG and the Turkish company Ercanlar A.S. The release of trucks was arranged in a wide range of modifications, but unfortunately they were not progressive in technical terms, so they were not in demand in European countries and were produced for export to Turkey and Iran, where they were widely used. First of all, the mod will be of interest to lovers of retro cars, such as the Mercedes-Benz LS-1519 and LS-1525, but the rest of the fans of the ETS 2 simulator will bring a lot of pleasant game hours.

The truck MAN 520 HN for Euro Truck Simulator 2 is made in very high quality, although there is only one cab on a chassis with a 6x2 wheel arrangement, virtual drivers will be pleased with the perfectly recreated original cab with an original instrument panel and implemented animation of switches. Of the elements of tuning should pay attention to the specific elements and color of the rims. In the cab of the MAN vehicle, it is possible to install a walkie-talkie with a dial indicator and a GPS navigator in a vintage style.

Dear user of the site, carrying out the transportation of goods on the virtual roads of Europe, for a variety of gameplay, do not forget to download and install new maps for any version of the simulator ETS 2!
MAN truck
Previous modNext mod

The test version of the Russian bus PAZ-3205 ETS 2. At the moment, there is no own original cabin, so when playing in the first-person mode, the player will be in the cabin of the KAMAZ truck....