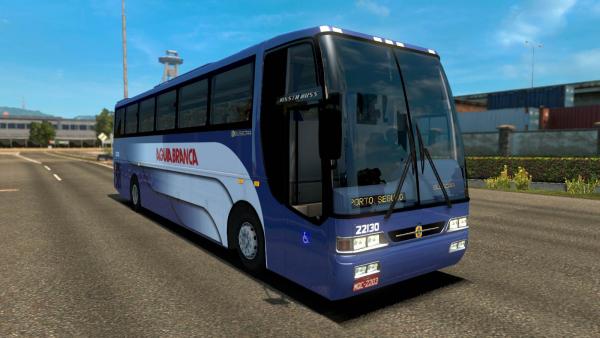 The Busscar Vissta Buss tourist bus, built on the basis of the famous Mercedes-Benz O400 RSE, is produced by the Brazilian manufacturer of large-capacity passenger vehicles Busscar Onibus S.A. since 1999. For its comfort and technical characteristics, the vehicle can compete with such a big name as the Scania Touring K360.

The Busscar Vissta Buss bus mod for Euro Truck Simulator 2 has a 4x2 chassis, the authors were able to recreate the interior of the passenger compartment and fully functional dashboard with the ability to adjust the steering wheel, as well as added the potential for opening and closing the door. ETS 2 simulator player is available to install a pair of engines on 354 horsepower and the same number of six speed gearboxes. For tuning enthusiasts, such an alternative is prepared, if you wish, you can seat passengers in the passenger compartment, choose a light information board, decorate the appearance with the 29 attached skins, tint glass and install license plates. In addition, the modification is supplemented by its own set of sound.

Dear user of the site, for passenger transportation by bus, do not forget to download and install Passenger mod for all ETS 2 simulator versions!
Busscar bus
Previous modNext mod

A comfortable one and a half floor Busscar Elegance 400 tourist bus from the Brazilian company Busscar Onibus S.A., designed to carry 48 passengers, in the ETS 2 simulator has a photographically...

The Brazilian luxury coach with panoramic windows for the passenger compartment of the Busscar Jum Buss 400 Panoramico in the game world Euro Truck Simulator 2 has a photographically accurate...