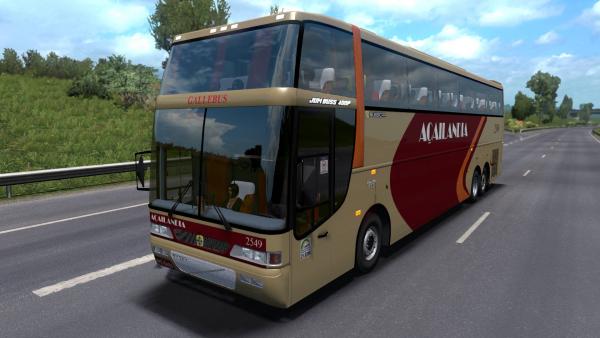 The Brazilian Busscar Jum Buss 400P luxury passenger bus, built on the Volvo B12B chassis, was produced by Busscar Ônibus S.A. since 1995. The vehicle has a panoramic glazing of the passenger compartment, which allows it to be used on tourist routes.

The mod of the Busscar Jum Buss 400 Panoramico bus for Euro Truck Simulator 2 on a chassis with a 6x2 wheel formula has a photographically realistic appearance, with its creation a high-quality detailed three-dimensional model was used. The authors for sure recreated the interior of the cabin with full animation in which passengers can be accommodated. Players of the ETS 2 simulator can choose a suspension suitable for stiffness, out of six available, any of five engines with a capacity of 396 to 750 horsepower, as well as the corresponding gearbox at 7, 12, 12 + 2 speeds. Of particular note are 41 original bright skin, its own soundtrack and exhaust animation.

Dear user of the site, for passenger transportation by bus, do not forget to download and install Passenger mod for all ETS 2 simulator versions!
Busscar bus
Previous modNext mod