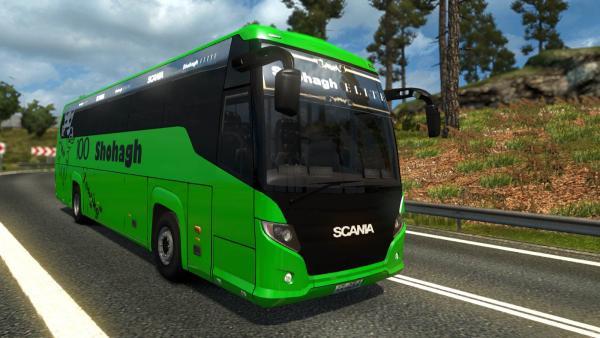 The comfortable two-axle Scania Touring K360 bus, 12.1 meters long, is designed to carry 51 passengers. A distinctive feature of it are the most advanced technical solutions in the field of maximum safety and convenience for both passengers and the driver.

The Scania Touring K360 bus mod for Euro Truck Simulator 2 is made in the right-hand drive, unlike the Scania Busscar Elegance 360 left-hand drive colleague, which makes it possible to operate it in left-hand drive locations both on standard UK tracks and on authoring maps such as Indonesia , and the likes of her. The vehicle has a 4x2 chassis, five engines with a capacity of 460 horsepower and the same number of gearboxes at 6, 12 and 21 speeds. The authors managed to recreate the original interior of the cabin, prescribe animation, support for DLC Toys and their own physics of behavior and control. In addition, Scania provides for a change in branded skins and the possibility of small tuning in any of the garages of the ETS 2 simulator.

The modern comfortable Scania Touring K410 bus, designed for 44 seats and working on long-distance routes, has two steering wheel options, left and right, which increases convenience when driving in...