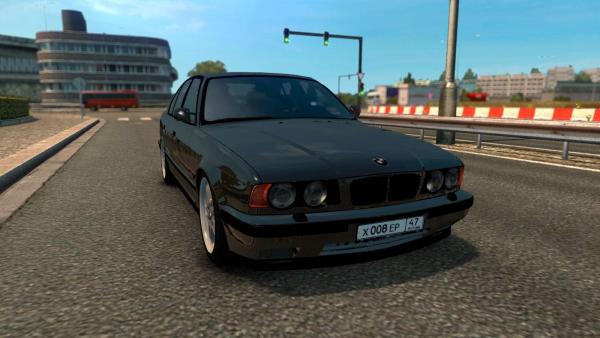 The car BMW E34 was produced in the period from 1988 to 1996 by the eminent German automobile concern. For the entire time of production, about one and a half million copies of cars rolled off the assembly line. In Russia, these representatives of the Western automotive industry are known, first of all, for the dashing nineties, when the brave skin-headed guys cut through the streets of the cities, arranging gang fights.

The mod of the BMW E34 passenger car for Euro Truck Simulator 2 is made in a photorealistic version. The player of the ETS 2 simulator in the workshop can paint his BMW in any color, including metallic paint, choose headlights and taillights, as well as a suitable engine from the four available in the kit. Own physics of behavior maximally brings the virtual version of the car closer to the real prototype, which can be seen on the racetrack. As for the wheels, they, the same original ones, have characteristic wheels and low profile tires.

Turkish car Tofas Serce, the prototype of which was the Fiat-124, in the ETS 2 simulator has a very realistic appearance. In technical terms, the car is equipped with an engine and gearbox with...

Bavarian sports car BMW i8 BMW i8 unfortunately does not have additional elements for tuning, but this flaw is easily covered by the original interior of an elite passenger compartment, its own...

Although the ETS 2 simulator has a large number of standard tire models, a real trucker still wants to give more personality and realism to his truck, just for them the author’s mod was created: Pak...