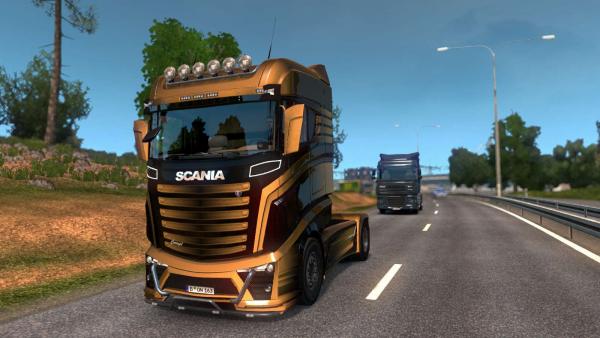 The Scania Concept tractor was created by the authors based on sketches of drawings and sketches of young designers and engineers of the European Bureau. This truck is fictitious, however, according to the characteristic features of the cab, it is easy to recognize the features of a major European automobile manufacturer in a truck. The swift and futuristic look of the car gives out the power and strength of a rapidly developing 21st century. The car is quite easy to drive, which can be easily verified by driving it on the racing track of the ETS 2 simulator, evaluating its driving performance.

The Scania Concept tractor mod for Euro Truck Simulator 2 is built on a 4x2 chassis, has only one cabin with a classic interior, two gearboxes and three engines with a capacity of 500, 580 and 730 horsepower. External tuning is quite modest and includes only two options in the form of a kenguryatnik and an arch on the roof, however, this drawback more than compensates for the smoothness and colorful appearance of the futuristic Scania car.