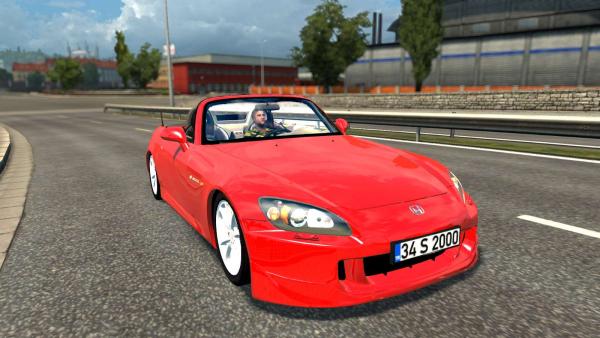 In the mid-nineties, the Japanese company Honda developed a sports car Honda S2000 with a roadster-type body, mass production of which began in 1999. In the basic configuration, the car was equipped with a two-liter engine with a capacity of 247 horsepower and a six-speed manual gearbox.

The Honda S2000 car mod for Euro Truck Simulator 2 optionally includes several roof options, hard or canvas, of different colors, there is also a variation of the convertible. From power units to the virtual driver, engines for 170 and 391 horsepower are available, the power of which can be tested on the racetrack. In any of the garages of the ETS 2 simulator, a player can install original wheels, a stylish bumper, a spoiler, an antenna and some other exterior items onto his passenger car. The authors managed to implement a high-quality interior with their own dashboard, in which, if desired, you can mount a GPS navigator.

Another high-quality passenger car model has appeared in the ETS 2 simulator. This time, it is the Honda Civic IES, which has arrived on the virtual roads of Europe, straight from the mid-nineties of...