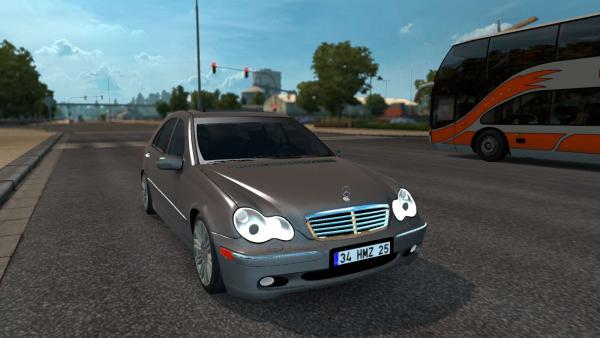 In the mid-nineties of the last century, Mercedes-Benz engineers developed the Mercedes-Benz W203. The car was the second generation of the Mercedes C-Class, and was produced until 2007. The popularity of the model was quite high not only abroad, but also in our country; car dealers, along with the BMW E34, eagerly drove cars for sale.

The mod of the Mercedes-Benz W203 passenger car for Euro Truck Simulator 2 has two body types: the classic W203 and the AMG version. When creating the modification, the authors used a three-dimensional model of the car, previously adapted for GTA San Andreas, which indicates its high quality. The player can install engines on 218 or 354 horsepower and one gearbox at 6 speeds. In any workshop of the ETS 2 simulator, you can paint a car in any color, including metallic. Of particular note is the original interior with a prescribed dashboard animation.