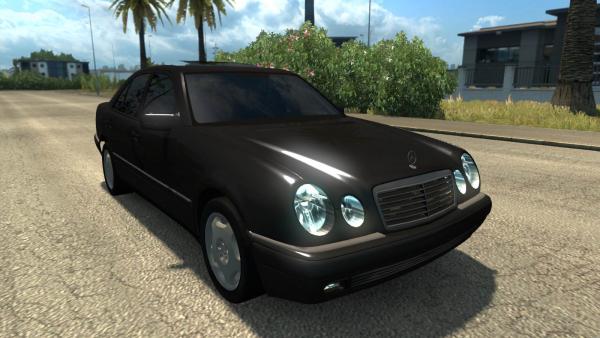 The business-class car Mercedes-Benz W210 was produced by the German company Mercedes in the period from 1995 to 2002. Compared with the previous W124 series, the new car has acquired a modern look, characterized by double oval headlights, which made it extremely different from its predecessors.

The mod of the passenger car Mercedes-Benz W210 for Euro Truck Simulator 2 is made in high quality performance not only of the body, but also in the implementation of the interior with prescribed animation. The developers of the modification implemented three types of suspensions with different clearance and two engine options with a capacity of 150 and 200 horsepower, respectively. To improve the appearance of the car, for the players of the ETS 2 simulator, six versions of rims and a pair of types of tires and exhaust pipes have been prepared.

The new Mercedes mod will appeal to fans of cars such as the Mercedes-Benz C32 AMG and similar popular luxury cars.