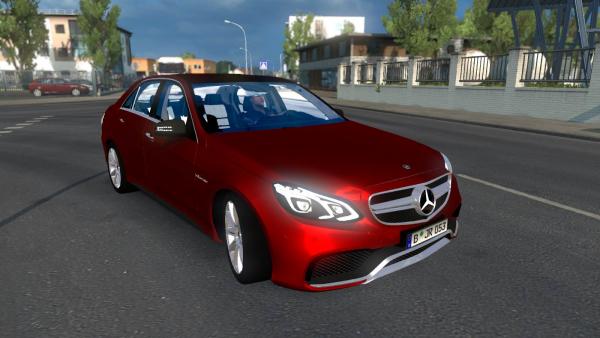 The luxury sports car of the executive class Mercedes-Benz E63 AMG, which has the external features traditional for the German automobile manufacturer, was first introduced to the general public in October 2016. In the basic configuration, the car is equipped with an engine with a capacity of 571 horsepower and a nine-speed automatic transmission, which allows it to easily accelerate to 100 kilometers per hour in 3.5 seconds.

Mod passenger car Mercedes-Benz E63 AMG for Euro Truck Simulator 2 is implemented in a high-quality model of the body and a well-designed interior. The physics of the engine prescribed by the authors in 585 horses paired with a seven-speed automatic, repeats with maximum accuracy the speed and agility of a real Mercedes car, as you can see by testing it on a race track. A set of their own sound effects creates an atmosphere of being at the wheel of this four-wheeled monster for the player of the ETS 2 simulator.

The virtual version of the luxury passenger car Mercedes-Benz S650 Maybach does not have anything special, but for players Euro Truck Simulator 2 is perfect for ordinary trips on the roads of...

Everyone who wanted to experience the power and strength of a six hundredth Mercedes is given the opportunity to experience all the technical stuff on the virtual version of the Mercedes-Benz S600...