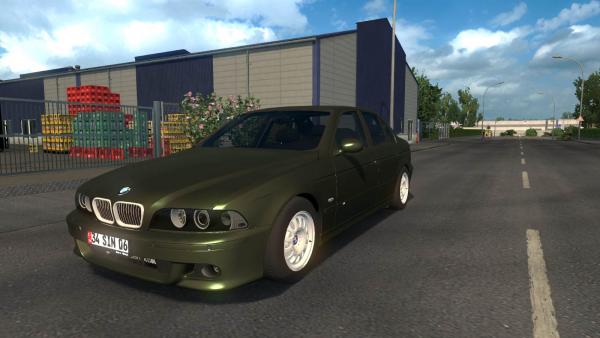 Cars BMW 5-Series E39 are a fairly popular car model among motorists. The production of the passenger car was established in 1995, and was carried out until 2003, replacing the top-end, but already obsolete, at that time, BMW E34. The BMW body took on more streamlined forms, which was the design style of the time.

The BMW 5-Series E39 passenger car mod for Euro Truck Simulator 2 was developed using a high-quality three-dimensional model, the authors implemented a pair of 282 and 395 horsepower engines and one six-speed gearbox. When buying at a car dealership or upgrading in a garage, the virtual driver of the ETS 2 simulator has the ability to install a spoiler on the trunk lid, moldings and a choice of wheel type, from the four available sets. At this, unfortunately, the tuning set ends, however, the quality of the interior, presented in two versions, with full animation of devices and buttons, will greatly appeal to the players.

Finally, in the simulator ETS 2 there was a new author's addition, the next version of the passenger car of the popular BMW brand-BMW 5-Series E34. Passenger car recreated using high-quality...

The business class passenger car BMW E60 in the sedan type in Euro Truck Simulator 2 is implemented with two highly detailed interior options with prescribed animation. On the technical side, three...

Executive SUV Volvo XC90, created using the original three-dimensional model of the body and detailed interior. When buying, two color options for the interior are offered, a pair of engines for 170...

Fashionable car BMW 3-Series E36 from German automobile manufacturers in Euro Truck Simulator 2 is implemented using a highly detailed model. The supplement is not without flaws, but it implements a...