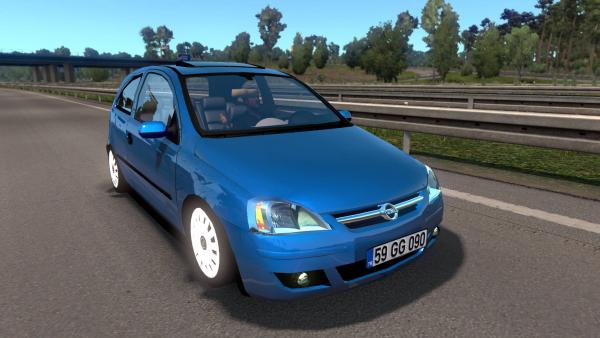 The production of Opel Corsa C cars was launched in September 2000. During the production, several types of modifications were produced, ranging from the type of bodywork to various types of engines and gearboxes.

Mod car Opel Corsa C 1.7 DTI in the three-door body type for Euro Truck Simulator 2 is made in very good quality. The car is autonomous, has a highly detailed body, a couple of its own interiors with animation and support for DLC Cabin Accessories. When buying a car, the player of the ETS 2 simulator can choose a suspension, out of the three available, install an engine with a power of 170 or 220 horsepower and a six-speed gearbox under the hood. Tuning is also available, among spare parts you can find spoilers, bumpers, rooms, lighting, three types of wheels and other useful items. A distinctive feature of the Opel passenger car mod is its own set of sound effects, physics close to reality, and animation of exhaust pipe smoke.

Dear site user, for cargo transportation by passenger car, do not forget to download and install the mod Passenger trailer for all ETS 2 simulator versions!
cars Opel
Previous modNext mod

The game world of Euro Truck Simulator 2 has replenished with the new Opel Astra J passenger car, made in high quality. When creating the mod, a detailed three-dimensional model was used, thanks to...

The business class passenger car BMW E60 in the sedan type in Euro Truck Simulator 2 is implemented with two highly detailed interior options with prescribed animation. On the technical side, three...