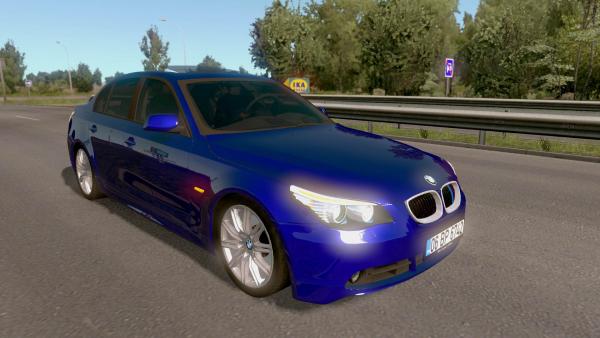 In 2003, the German company BMW launched the production of a new business-class car BMW E60, which replaced the outdated model BMW E39 on the conveyor. The car was so popular that by the end of 2010, more than a million copies of cars were produced.

The BMW E60 passenger car mod in the sedan type for Euro Truck Simulator 2 has a highly detailed interior in two versions, with high-quality animation. On the technical side, the authors managed to recreate three branded engines with power from 163 to 218 horsepower and a six-speed gearbox with original settings. And of course, the developers of the modification did not forget about the possibility of tuning, in any auto repair shop, the player of the ETS 2 simulator can replace the grille, bumpers, exhaust pipes, trunk lids and select license plates.

In Euro Truck Simulator 2 there is a new passenger car business class BMW M5 E60 from German manufacturers. Mod passenger car is made using high-quality three-dimensional model of the body. There is...

Sports version of the car BMW fifth series, BMW M5 E39, will be a great addition to the game Euro Truck Simulator 2. The car will be a great alternative for fans of high-speed driving on virtual...