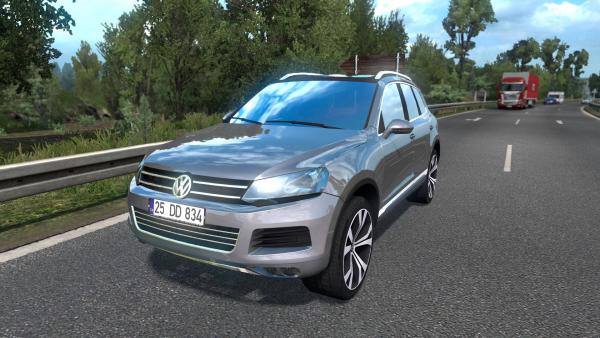 Volkswagen Touareg is a medium-sized German crossover manufactured by Volkswagen since the beginning of 2002. Currently, the assembly of a passenger car has been launched in Slovakia at a factory located in the city of Bratislava. Some time ago, car production was carried out in Russian Kaluga.

Mod car Volkswagen Touareg for Euro Truck Simulator 2 has a realistic appearance of the body on a single version of the chassis. Authors for certain recreated a detailed original interior of the cabin with full animation and support for accessories. A simulator player under the hood can install one of two available engines with a power of 230 and 550 horsepower, paired with an eight-speed gearbox. Modification, unfortunately, does not support the possibility of external tuning, however, there is a set of brand wheels, added own sounds and an alternative to painting the body in any color, including metallic.