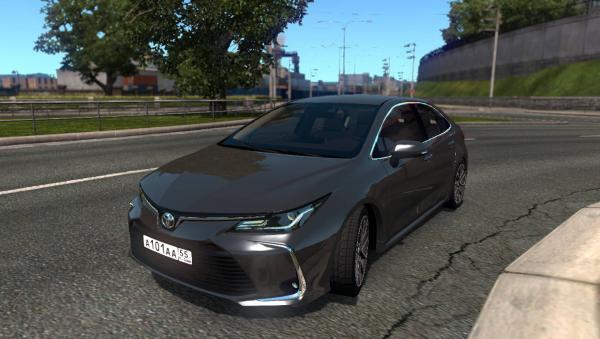 One of the most popular and sold worldwide passenger car Toyota Corolla, from the Japanese company Toyota, is produced from 1966 to the present. The car has established itself as a reliable and comfortable passenger car, which earned it considerable popularity among motorists.

The 12th generation Toyota Corolla passenger car mod in the sedan-type body, 2020 model year, for Euro Truck Simulator 2, is distinguished by high detail and photographic accuracy of execution. The authors recreated to the smallest detail the original interior of the cabin with basic animation; on the technical side, there are a pair of engines with their own sound effects for each, and a six-speed gearbox. For the players of the ETS 2 simulator, the possibility of towing a light trailer and installing flashing beacons on the roof is prepared.

For fans of Russian maps, a Russian license plate is available, which can be downloaded here.

Dear site user, for cargo transportation by passenger car, do not forget to download and install the mod Passenger trailer for all ETS 2 simulator versions!
cars Toyota
Previous modNext mod