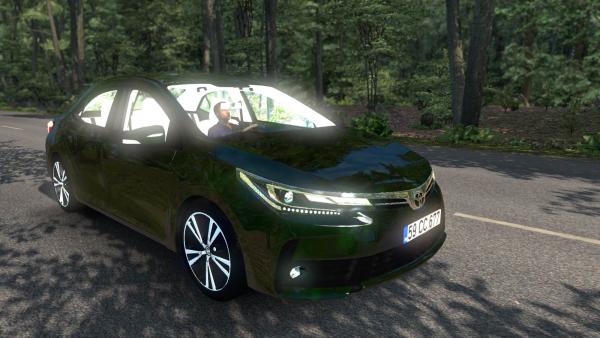 One of the most popular passenger cars in the world, Toyota Corolla, was first presented to the public in 1966, after many years the car survived several reincarnations, and is still produced today.

The mod of the Toyota Corolla passenger car, model 2017-2018, in the sedan for Euro Truck Simulator 2, was created using a detailed three-dimensional model. The authors implemented a variant with a left-hand drive arrangement, unlike Toyota Mark II, the original interior, with well-written animation, exactly repeats the real existing prototype. The modification is equipped with a pair of engines with 160 and 170 horsepower and a six-speed gearbox. Toyota branded wheels, special skins, police flashing lights and a taxi lamp will allow the player of the ETS 2 simulator to create his own unique look of a passenger car.

And for fans of Russian maps, an additional Russian number was prepared, which you can download from this link. You should be aware that when connecting add-ons, the license plate file must be higher than the main mode.

Dear site user, for cargo transportation by passenger car, do not forget to download and install the mod Passenger trailer for all ETS 2 simulator versions!
Toyota cars
Previous modNext mod

Passenger car Toyota Corolla, 12th generation sedan type, 2020 model year, will win the hearts of Euro Truck Simulator 2 lovers. The mod is of high quality, which gives the virtual brother of the...