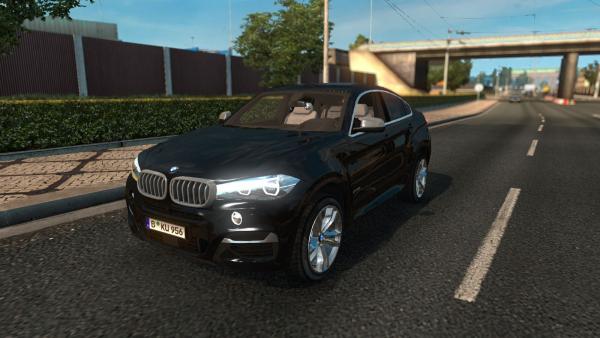 The fast and reliable urban crossover BMW X6 in the sports version with all-wheel drive is equipped with a boosted twin-turbo engine with a capacity of 555 horsepower. The car received a completely new suspension and steering mechanism, which allowed it to go at high speeds to any, even the coolest, turns. The appearance of the mass version differs slightly, the designers only emphasized the playfulness of the car.

The BMW X6 M crossover mod for Euro Truck Simulator 2 was created using a high-quality original model and high-resolution textures. The geometry of the body, which can easily be painted in affordable colors, exactly repeats its original double, and the interior, with the ability to place additional objects, and with a panoramic roof, shines with luxury finishes. The BMW is equipped with a chic, varnished passenger car trailer for the transport of goods, which, if necessary, can be replaced with another, simpler car trailer for the tasks of transport companies. The virtual driver of the ETS 2 simulator will be happy to drive European roads on a steep wheelbarrow to the envy of other truckers.

Mod urban elite crossover BMW X5M perfectly repeats all the features of a real existing passenger car. The virtual car is equipped with an original engine with a volume of 5.5 liters and a capacity...

In 2005, the famous Italian manufacturer of passenger cars presented to the general public his new car, the Alfa Romeo 159. The virtual version of the car in the ETS 2 simulator was presented using a...