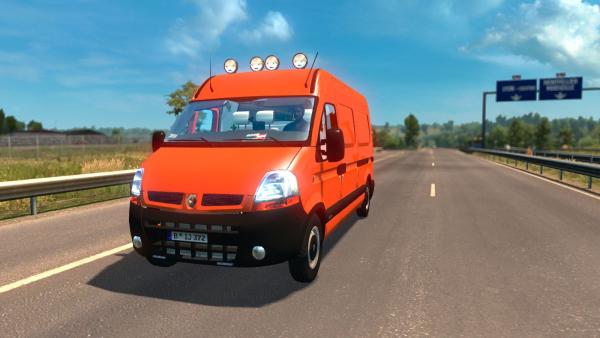 For several years, French engineers developed a van for the transport of goods of small weight and dimensions, as a result, through the collective creativity of the creators, the economical Renualt Master L2H2 van was seen, the fuel consumption of which is 8.1 liters per 100 kilometers with an engine power of 125 horsepower. The car has two passenger seats, except for the driver's seat. The machine is quite in demand for delivering goods in small batches over short distances, the volume of usable space is 10.3 cubic meters with a cargo weight of not more than 1.5 tons.

At first glance, this type of car does not have a place in the ETS 2 simulator, however, with the help of the author’s modifications, virtual truckers can also find a worthy application by downloading and installing the addition of a passenger trailer, the driver will be able to transport goods, thus preserving the style of the game and expanding its functionality more.

The mod of the van Renualt Master L2H2 for Euro Truck Simulator 2 is made in very good quality, the developers transferred almost everything that the real prototype of the Renault car has, it's the body, the original wheels, the characteristic interior of the cabin, and the decorative elements, and much more .

In the latest versions of mod 3.0, a new tuning was implemented, as well as a version of a truck and a tent truck, occupying two slots, an additional interior of the cabin and three types of original cargo trailers.

Dear site user, for cargo transportation by passenger car, do not forget to download and install the mod Passenger trailer for all ETS 2 simulator versions!
Renault van
Previous modNext mod

The new addition adds a new oversized load to transport companies, namely a semi-trailer with a huge trunk of an exotic baobab tree. The player will have to make his own route, different from the...

Commercial vehicles Volkswagen Crafter have long and firmly entered the life of western carriers, body variations allow the van to be used in many transportation industries. Our Volkswagen can be...

The nine-passenger Fiat Ducato minibus enables the player to feel like a fixed-route taxi driver, because the add-on has a very interesting possibility of placing passengers inside the passenger...